“The national epidemic of opioid abuse has claimed more than 300,000 lives in the U.S. over the last 16 years — and some researchers claim that kratom, an herbal psychoactive drug that is currently unregulated, could help people struggling with addiction. But federal drug policy-makers may classify kratom as an illegal drug, which would slow down its sale, research and development.”

Reporter Mike Taibbi takes a close-up look at first hand reports of the benefits of Kratom, and does a ten minute deep-dive into the regulatory agencies bias towards testing and approving pharmaceutical drugs, while leaving natural Kratom inaccessible for testing and in limbo.

The issue of whether or not to ban kratom is an excellent litmus test of whether the Biden administration will actually use the philosophy of harm reduction to guide drug policy—or just spout the trendy catchphrase as window dressing to hide ongoing engagement in the war on drugs.

Since kratom never drew enough international attention to spur an American or global prohibition, our lax regulation of “health supplements” made from plants allows it to be sold legally here. Sales have risen sharply in recent years, as both pain patients and people with addiction have increasingly lost access to medical opioids during the overdose crisis.

For more than 100 years, the main strategy America has used to deal with drug problems is prohibition. With the exception of alcohol, caffeine and tobacco, nearly every substance that has publicly been associated with recreational use has either been banned entirely or strictly confined to medical use. Prohibition policy—such as the war on drugs—assumes that restricting drug sales and possession will solve the problem, period.

In contrast, when policy makers are guided by harm reduction, they have to assess whether banning a specific drug or allowing continued sales will do more damage—in the current context of other drugs for which it may substitute and other factors like harms associated with arrest and incarceration. 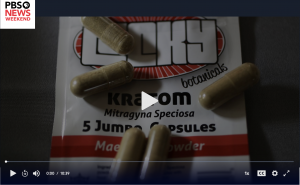